Skip to content
Availability 2017/2018.
Marian Badoï played at ” Jazz in Vienne festival ” in july 2016, one of most famous French jazz festival’s.

The music knows sometimes how to surprise us, “to pick” us, to move us until the inmost depths: Marian Badoï, sublime gypsy accordionist, exceptionally genuis musician, makes arise under his fingers the magic of one of the most beautiful musics of the World!

The project marries the Gipsy Jazz with the gypsy authenticity brought by Marian and its beautiful improvisations: exceptionally genuis musicians in the service of a strong and original project.

More
Because too often today, we have difficulty in finding the wealth of the music of Django Reinhardt in those played by some groups “Gipsy Jazz” and especially no track of the gypsy soul which was the one of Django.

Marian kept his soul and this virtuoso accordionist remains profoundly attached to his Romanian roots.

The Marian Badoï Trio addresses all those who like an alternately joyful, grave and deep music without concession!

« Marian BADOÏ glistens with generosity in improvisations where stream a shower of refreshing, joyful, unexpected notes.
His accordion makes waltzes swirl and ballads, jazz gipsy and Roma tradition until the dizziness. A poetic whirlwind of which we go out delighted. » Romain Grosman, Jazz News – sept 2014 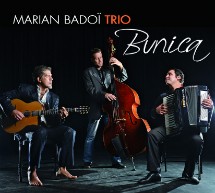